Great Olympics 2-0 victory over Hearts of Oak over the weekend in match-day 11 of the Ghana Premier League came as a surprise to many but the men who inspired the team to victory have less been talked about.

Coach Yaw Preko, his assistant, Godwin Attramand goalkeeper’s trainer, Richard Kingson are the men who seem to have been forgotten as the brains behind the team’s success.

A sublime free-kick from Captain Gladson Awako placed Olympics ahead in the early minutes of the game. However, Maxwell Abbey’s perfectly placed strike secured the spoils for Great Olympics to move 3rd on the league table.

Whiles many celebrate Olympics’ first victory in a decade over their regional rivals, the men who plotted the defeat of their rivals have received the lowest claps. 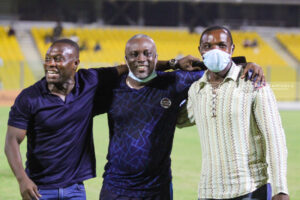 The new Technical Team set up of Great Olympics is what played an instrumental role in the team’s success on Sunday at the Accra Sports Stadium.

The former Hearts of Oak assistant coach got the mission accomplished in his toughest assignment since taking up the job. According to the coach, his tactics to beat the Phobians was simple, “the boys came to the party and we decided to hit them early and it worked. In the 2nd half, all we had to do was to be compact and exactly our plan really worked well for us.”

As one who has been around the team for very long, retiring as a player-coach, Godwin Attrambrought his expertise on the touchline as he collaborated with his boss, assistant, Godwin Attram to issue commands from the touchlines. Indeed the charisma of the boys was high in the game and Attram deserves the accolades for that.

Former Black Stars goalkeeper’s trainer Richard Kingston joined the technical team on January 15 and since then the team has kept two clean sheets in a role- against Karela and Hearts of Oak.

It was no surprise that against all odds Olympics goalkeeper, Salifu Saed won the man of the match in the game. Saed acknowledged Kingson’s impact on him ahead of the game when he said during the post-match interview that “he told us yesterday that whatever he’s going to teach us yesterday was going to come to past.

So it was like I had played the match already at training so I was coming to repeat it here.” Salifu Saed who was formerly with Inter Allies also noted that he had never lost a game against Hearts of Oak before.

Source: www.ghanaweb.com
You can send us your stories via editor@thenewindependentonline.com or Whatsapp @ +233549522573
94 View(s)