Ghana Police Service have once again engaged Zoomlion Ghana Limited to disinfect all its facilities in the country.

The exercise, which will span one week, is part of continuous measures to curb the spread of the Covid-19 at police stations, barracks, training schools, markets, cells, and offices.

Speaking to journalists at the Ahafo Regional Police Headquarters, the Deputy Regional Police Commander, Assistant Commissioner of Police (ACP) Andrews Boadu Ekumah, who spoke on behalf of the regional commander, thanked the government and Zoomlion for their continuous efforts to protect law enforcers in the midst of the Covid-19 pandemic.

He assured that the regional command will continue to play its role in ensuring that citizens in the region observe the Covid rules.

The Zonal Manager, Zoomlion Ghana Limited, in the Ahafo Region, Mr Edward Ziddah, gave a firm assurance that his outfit will continue to support the government in its quest to defeat the virus.

According to him, about fifty (50) police installations were expected to be disinfected within a space of two days.
It would be recalled that the police in May last year, launched a nationwide exercise at the Police Training School in Accra to fumigate and disinfect all 1,249 facilities of the service in the country. 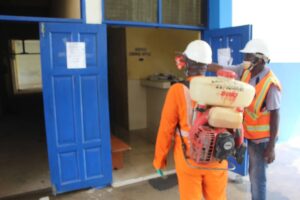 The Inspector-General of Police (IGP), Mr James Oppong Boanuh, who launched the exercise, said the health and safety of personnel of the service were paramount to ensuring security in the country. That exercise spanned one month. 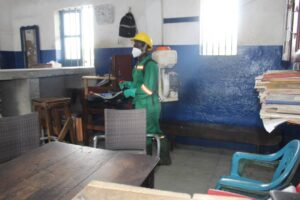