The Executive Director of ASEPA, Mensah Thompson has revealed that, his outfit is dragging the Director of Communication at the Presidency, Mr. Eugene Arhin to Commission on Human Rights & Administrative Justice (CHRAJ).

This act he explained is to enable Eugene Arhin to explain the sources of his assets in four years as alleged in a  divorce petition by his wife.

In a release sighted by www.thenewindependentonline.com shows that, Executive Director, Mensah Thompson is not letting his guard down as he continues to fight the nation’s canker, corruption.

Meanwhile he commended Mr. Eugene Arhin for exercising hogj sense of maturity by restraining from washing his marital linen in public.

Emphasizing that, “In lieu of the pertaining issues raised against him by his wife, the appropriate forum to respond to them is the Court and we happy he has chosen to do just that”.

However he was quick to say, “there is an even bigger interest of the public which pertains the number of assets listed by his wife in the divorce petition as assets acquired by Mr.Arhin in the last four years for which she is making a claim of 50% on”.

In the interest of public accountability for public officers, he disclosed that, ASEPA has completed a petition invoking the jurisdiction of CHRAJ to investigate Mr.Arhin who is also the Director of Communication for the Presidency.

This he said is on the grounds of illegal acquisition of wealth which would be filed in the early hours of today 12th February, 2021.

Among other things the petition would be praying to CHRAJ is to subpoena Mr.Arhin’s Asset Declaration records upon assumption of office as Director of Communication at the Presidency and compare them with the number of assets listed on the divorce petition then put it along side his salary for the last four years.

“The average salary of a Presidential staffer is about GHC14,000 and so in four years Mr.Arhin’s total gross salary estimates around GHC560,000 minus his liabilities or monthly expenditures”, he asserted.

Mensah Thompson stressed that, Mr. Arhin must definitely explain to CHRAJ how he was able to acquire those staggering properties in four years considering the current compensation regime for Presidential staffers in Ghana.

Below is the Divorce Petition filed by Mr. Eugene Arhin’s wife: 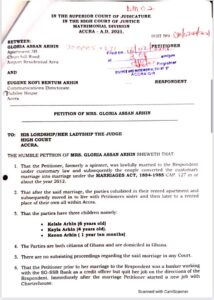 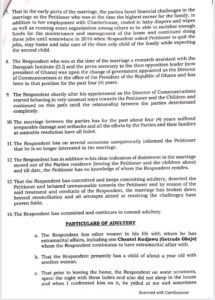 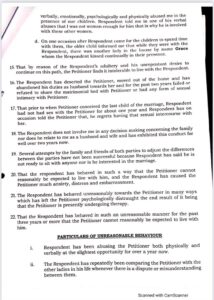