The Spanish Embassy in Ghana on Friday, February 26, 2021 donated equipment to the Ghana Immigration Service (GIS) and Ghana Police Service (GPS) to help fight crime at the country’s borders.p

The items included four (4) off-road vehicles, four (4) All Terrain Vehicle -quads, four (4) helmet, ten (10) computers and eight (8) printers. One of the pick-up vehicles were presented to the Ghana Police Service.

The Interior Minister-designate, Mr. Ambrose Dery (MP), who received the items on behalf of the President of the Republic of Ghana, thanked Spain for the gesture and pledged that the equipment will serve its intended purpose.

“The gesture is a show of true friendship between Spain and Ghana. Spain is a good example of partner of the Ministry to achieve the government’s vision of making our country a safer place,” he said.

H.E Madam Cristina Gallach Figueras, State Secretary for Foreign Affairs and Ibero-America and the Caribbean, Government of Spain, who was on a state visit to Ghana presented the items on behalf of the Spanish Government.

She commended the Government of Ghana of its strategic response to border crimes adding that security agencies manning the borders should be well resourced to help fight border crimes.

The Deputy Foreign Affairs Minister of Spain, Mrs Christiana Gallach, on behalf of the delegation explained that, the presentation was to support the fight against irregular migration and cross-border crimes.

She said Spain would continue to show her full support and commitment to Ghana because of the deep relationship between the two countries. 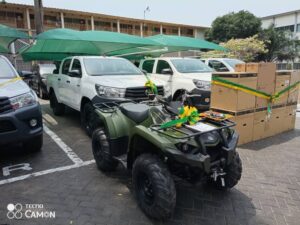 “We will work together to promote efficiency and goodwill between the two countries in addressing irregular migration and other border related challenges,” she said.

She indicated that Spain and Ghana shared a vision of handling illicit migration and border related issues through a comprehensive approach because of the care and love for human rights and socio-economic development.

“We are proud of the cooperation between the two countries because when Ghana is safer, we also in Europe will be safer hence security issues cannot be taken for granted.”Mrs Gallach said. 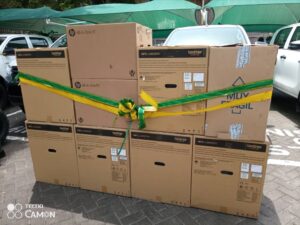 Speaking on human trafficking, Mr Amoako-Atta noted that part of the items are going to the human trafficking in persons unit to help in their public Education Outreaches across the country.

GIS has set three Immigration Centers across the country one in the Northern sector, Brong Ahafo Region and the Headquarters to ensure that they sensitise the Public against irregular migration and to let them know the safer way to migration as well as the alternatives to migrate.