Government has been urged to intensify the distribution of free clean stoves to inner towns in the country.

This call comes after a research conducted by Strategic Youth Network for Development (SYND) Ghana, on clean cooking from the 1st to 7th of February, 2022 in the Atwima Kwanwoma, Tamale Metropolitan District and Cape Coast Metropolitan District in the Ashanti, Northern and Central Regions respectively.

The objective of the research among others was to assess the distribution of free clean cook stoves distributed by the government of Ghana.

This is in line with the launch of an improved cooking distribution project which was to see the manufacturing and free distribution of 500,000 improved charcoal stoves in Ghana to 350,000 rural households across the country.

The $5.5 million project funded by the South Korea Government is to benefit approximately 1.8million Ghanaians.

The use of these improved and efficient charcoal stoves along side ongoing reforestation programmes is excepted to reduce significantly the emission of carbon dioxide and the rate of deforestation in the country.

Speaking to the press on its findings during the three regions visit, the Energy Focal Point at SYND, Ms Priscilla Adogo Ahiada indicated that, apart from feeding into government’s free distribution of 500,000 clean cook stoves, the research also feed into acheiving SDG7 ( Clean and affordable energy), Sustainable Energy for All(SE4All) and the Nationally Determined Contributions (Gh- NDCs).

The SE4ALL country Action Plan concentrates on two main sources of clean modern energy; liquefied Petroleum, Gas and improved cook stoves as solutions to high rates of deforestation in the country as a result of the felling of trees for charcoal production and reducing acute lower respiratory infections like pneumonia as well as other respiratory, cardiovascular and ocular diseases which comes as a result of air pollution from cooking with solid fuels.

She revealed that, women interviewed had less or no knowledge on clean energy and it’s benefits which was disturbing and worrying.o

Furthermore, women who use charcoal can easily transition into using cleaner ways of cooking .

During the team interaction, it was realized that, women who use firewood also uses the charcoal produced from the firewood into cooking.

Also, women who use clean cook stoves use LPG as backups, while in Banvim the women stated that charcoal was the only option available for them to use in cooking.

Based on the findings, Strategic Youth Network for Development (SYND)believes that, the transition of these women won’t be difficult since they have been able to transitioned from firewoods to charcoal.

Therefore calls on government to intensify the distribution of clean cook stoves in inner towns and by so doing, less charcoal would be used by these women. 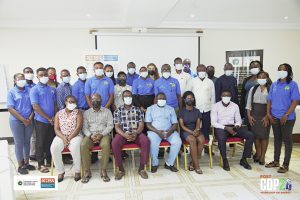 Therefore called on government to partner with CSOs in advocacy and education on health and environment implications of clean cook stoves.

Again that, government should support companies of clean cook stoves for households to make it affordable and accessible by all.

Government To Set Up Agricultural Development Zone In Northern Region

AG Leadership to Deepen Collaboration with Other Churches