‘Be Professional in Your Duties at All Time’- Outgoing CDS

Soldiers of the Ghana Army have been advised to be professional at all times in their duties and as well avoid tendacies that would damage the higly respected image of the Forces.

The passionate call was made by the outgoing Chief of the Defence Staff (CDS), Lt. Gen. Obed Boamah Akwa on Friday 6th January, 2021 as he was officially pulled out of the Ghana Armed Forces (GAF) to mark the end of his service as a military officer.

To him, it is important for Military officers to uphild the virtues and training of Service as they discharge their Constitutional mandate to the nation.

He used the ocassion to thank all rank and file for their numerous support during his days in the Service and prayed they render such support and assistance to the incoming CDS.

As well the President of the Republic, Akufo-Addo for giving him the opportunity to serve as the CDS and for his enormous support to the GAF during his tenure.

He also thanked Mr. Nitiwul for his guidance and support throughout his tenure and expressed his gratitude.

He added that “indeed, so much was achieved during my administration that can been seen and showcased.”

Citing the massive infusion of vehicular transport for both operational and welfare purposes, barracks regeneration projects across all the garrisons, transformation of the Ghana Military Academy into a centre of excellence, forward operation base at strategic locations across the country among others.

He also showed appreciation to his predecessors, who he acknowledged laid the foundation upon which he and his team have continued to build the Armed Forces.

“I thank them for the wise counsel I received from them during my period in command” he said.

Adding, “I have leant over the years to always recognize and pay glowing tributes to our gallant soldiers, sailors and airmen, who will always stay the course with you in the most difficult situations once you win their trust.”

“The threat dynamics of our country are changing on a daily basis, and we need to continually transform the way we do business as a military.”

Meanwhile, Rear Admiral Amoama before his appointment as the acting CDS a week ago by His Excellency, Nana Addo Dankwa Akufo-Addo was the Chief of Naval Staff.

The colourful ceremony held  at the forecourt of the Directorate of Public Affairs was graced by  the Minister-designate for Defence, Dominic Nitiwul, together with other Service Chiefs as well other senior military officers including the Chief of the Army Staff, Major General Thomas Oppong Preprah, Chief of Air Staff.

The rest are Air Vice Marshal Frank Handson, Commandant of the Ghana Armed Forces Command and Staff College and other heads of security services.

In a farewell speech before being pulled out from the Service, Lt. Gen. Akwa acknowledged his 46 years, 14 days of military service, hence and attaining the pinnacle of the military profession is of great service to God and Country.

This makes him the longest serving officer in the history of the Service.

Lt. Gen. Akwa was enlisted into the Ghana Military Academy in 1975 with regular intake 18 and continued with his basic officer training at the Royal Military Academy, Sandhurst, UK.

He was commissioned into the Ghana Armed Forces as an Infantry Officer in Ghana Army in March 1977. 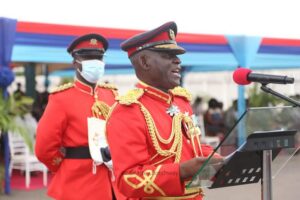 During former President J.A. Kuffours term in presidency he was the aide-de-camp.

He holds a National Award as a Member of the Order of the Volta, Security Services Division (M V).