Dortmund removed me from squad and wanted me out – Matthew Amoah

Former Ghana striker Matthew Amoah has revealed an aggravated injury during the 2006 Africa Cup of Nations significantly contributed to his poor spell at Borussia Dortmund.

After scoring nine times in 18 Eredivisie appearances for Dutch side Vitesse Arnhem during the first half of the 2005-06 season, the forward was snapped up by the Black and Yellows during the winter transfer window, signing a two-year deal to reunite with former coach Bert van Marwijk.

Shortly after signing, Amoah headed for Afcon with Ghana who ultimately suffered a first-round elimination in Egypt. 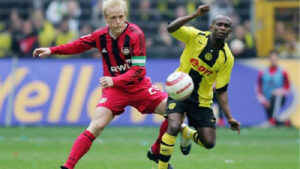 “My time in Dortmund was very hard at the beginning. I was at the Africa Cup and came back with a knee injury, so I struggled. I had already picked up the injury in my last game for Vitesse,” Amoah told Goal.

“After I signed, I wanted to play quickly, so I started training early and injured myself again – on the same knee. So I travelled to Egypt battered, where the problems came back. The directors of course were not pleased, but Bert van Marwijk told me that I should take my time.

“When van Marwijk left, my problems really started. The people in charge had me removed from the squad because it was van Marwijk who had signed me. They didn’t want to use a player who was explicitly wanted and brought in by him.

“Michael Zorc was always nice to me. It was the people who were above him. They wanted me to leave. When you hear something like that, everything is crystal clear.”

At the end of his two-year spell, Amoah made a paltry 17 league appearances involving five starts for Dortmund, drawing blank over the period.

“Maybe people are right. A striker who plays 17 games and doesn’t score a goal is bad,” Amoah responded to being tagged a failure at Dortmund.

“Yet they don’t know the reasons, but a striker is there to score goals. In the end, it’s the statistics that count. If you look at my games, you see that I had good performances. But from the outside, you might think that the pressure in Dortmund was just too high.

“I had a really good time and great teammates. Everything you experience in life is a lesson that makes you stronger. I had enough chances to score, but I was just unlucky.”

Amoah headed back to the Netherlands after his Dortmund spell, joining NAC Breda where he rediscovered his scoring boots and netted 34 goals in 108 outings.