Ghana Police Service, in partnership with waste management expert, Zoomlion Ghana Limited (ZGL), has commenced the disinfection of all police installations in the Greater Accra Region.

The two-day exercise (Tuesday, February 9th-Wednesday, February 10th, 2021) is to disinfect all police installations including cells, barracks and offices across the region and the remaining fifteen regions.

And it is part of measures to combat the spread of the pandemic at the various police facilities in the country.

Interacting with the media, the Greater Accra General Manager of Zoomlion Ghana Limited (ZGL), Mr Ernest Morgan Acquah, indicated that the exercise was the second time his outfit had been engaged to disinfect all police facilities.

Explaining further, he said the exercise was in response to the service’s call to disinfect all its installations such as barracks, cells and police stations as a way of safeguarding the lives of personnel and inmates.

“It is important we step up our game to eliminate the virus in our various set-ups and environments to halt the spread of the virus in places including cells, barracks and police offices,” he added.

According to him, over one hundred and thirty (130) police installations would be disinfected within the Greater Accra Region.

Mr Morgan Acquah, however appealed to Ghanaians to continue adhering to all the covid protocols including the washing of hands with soaps, observing social distancing, use of sanitisers and wearing of nose/face masks at all times. 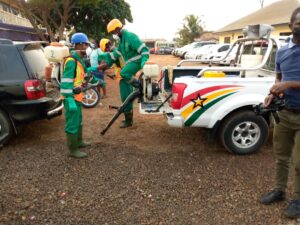 However, he explained that his outfit was not able to detain them in their cells.

“This was due to the fact that we did not know their Covid status.”

These thirty seven (37) persons who where arrested for violating the wearing of nose/face mask law, according to him’ were cautioned and asked to do the right thing. 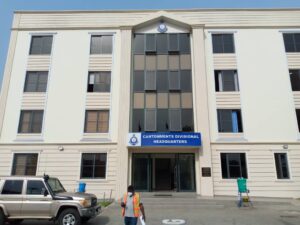 Superintendent Peter Akabati made these statements while speaking to the media on Tuesday, February 9, 2021, during the disinfection of his divisional headquarters at Cantonments, Accra.

In addition, the Cantonments divisional commander acknowledged that the disinfection exercise will ensure the safety of police officers as they discharge their constitutional mandated duties of protecting lives and properties and the inmates as well.

“This is the way to protect the police force as well as inmates from contracting the virus. And therefore, I want to use this opportunity to applaud Zoomlion Ghana Limited and the leadership of the Ghana Police Service for such a fruitful exercise,” he said. 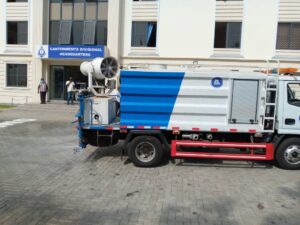 The exercise started in the early hours of Tuesday at the Kaneshie Police Divisional Headquarters where its offices and environment were disinfected.

Officers present expressed their gratitude and thanked Zoomlion for the exercise.