The Minister-designate for Interior, Ambrose Dery, has advised police commanders to pay attention to the grievances of junior officers to help curb the cases of suicide among personnel.

According to him, there is the need for Commanders to exhibit true leadership at various levels adding “When an officer reports to you, take note of the mannerisms of that officer and if you notice anything strange in their behaviour, please engage them. Don’t be dismissive of their concerns or grievances.”

Mr Dery gave the advice at the opening of a 4-day course on mental health for Senior Police Officers in Accra.

The course, organised by the Ghana Police Service, in collaboration with the Ghana Psychological Association aims to enhance the knowledge base of participants to resolve issues pertaining to the mental health of police personnel.

The Minister Designate for the Interior, acknowledged that the mental state of personnel is critical in ensuring effective service delivery and lauded the Police Administration for making mental health a mainstream course in police training.

On his part, the Inspector General of Police (IGP), James Oppong-Boanuh, said the course would be replicated across the country to address some fundamental health concerns of personnel.

For him, the success of every organisation depends on the quality of its human resource and how satisfied the employee was. 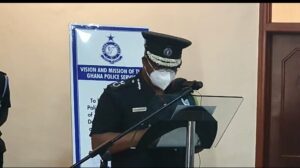 “Employees have always been integral components of the organisation and the continuity, viability and survival are anchored on them hence , the concept of employee welfare would always be part of organisational efficiency of the Service”, he said.

“One very important success criteria of every organisation is the extent to which it invest resources to support both physical and mental conditions of its workforce,” Mr Oppong-Buanuh added.

Policing he noted is one of the most stressful, demanding and potentially depressing professions that globally among most law enforcement officers, suicide is been considered an occupational hazard.

This is due to job stress, long hours of work, societal pressure, adjustment problems, unmet expectations, fierce threats in the line of duty, exposure to dangers and accident scenes, marital problems, availability of firearms and alcoholism, the IGP said.

He said a number of police personnel goes through stressful conditions due to family and work-related issues and the situation gets severe when such people don’t get appropriate avenue to express their concerns for suitable redress.

“In extreme cases, they resort to suicide as the best solution to their mental agony.

Recent happenings of some senior and junior officers committing suicide are very regrettable concerns to the Police Administration.

This unwanted trend needs to cease henceforth and commanders have a very crucial role to play in this regard,” he emphasized.

“When officers don’t get an avenue for their grievances, some resort to suicide. We must note that there are different levels officers can take stress. We have very young officers among us, so we must take our time and listen to them”, he urged.

Their concerns he explained must be the priority of commanders adding  “That’s why there are welfare meetings, so listen to them and if you can’t solve it, push it to us, so we see what we can do.”

A 50-year-old police officer with the Ashiaman Court Unit, DSP Asiam Divine Yao, a police constable with the National Protection Unit, Eugene Yelnona and the Police Commander for Half Assini in the Western Region, Superintendent Cyprian Zenge all died similarly in a manner suspected to be suicide.

“We are still investigating and yet to determine if these were indeed suicides or not”, he revealed.

In the interim Mr. James Oppong-Boanuh indicated that there are a number of professionally trained psychologists who are ready to attend to personnel as when the need arises.

“Personnel are referred to clinical psychologists and psychiatrists at the Police Hospital or any other accredited health facility. These are culminated by welfare meetings and counselling sessions by officers of our religious affairs directorate”, he pointed out.

It is expected that the Unit, manned by competent personnel, would roll out a broad range of programmes to improve psychological concerns of staff and help them to overcome their struggles.

The counsellors would focus on individual treatment as well as group therapy to help others in similar situations to guide persons through the difficult transition of going from addict to functional personnel in the Service,the IGP said.

He expressed appreciation to stakeholders and the Ghana Psychological Association (GPA) for supporting the psychological wellbeing of police personnel.

The Commissioner of Police, Tiwaa Addo-Danquah, Director-General of Welfare, said personnel needed to speak up about the issues that burdens them to have them resolved.

She therefore advised senior officers to be observant to the change in behaviour of officers and find ways to draw them to themselves so they would open up.

The former President of GPA, Erica Danfrekua Dickson, lauded the IGP for welcoming them when they approached him concerning the workshop, and made it a reality within a week.

She advised police personnel to make good use of the Counseling Unit to reap the benefits with regard to their mental health.