The Minister for Energy, Dr, Matthew Opoku Prempeh, has declared that President Akufo-Addo is keen to see the Tema Oil Refinery (TOR) revitalised, create jobs and position itself as a market leader on the African continent.

The Minister, who is also the Member of Parliament for Manhyia South,  made these remarks during a meeting with management and staff of the refinery in his first official visit to any energy sector agency since taking office as Minister.

“The President does not want Tema Oil Refinery sold on his watch’, the Minister stated.

Pointing out that,  ” TOR is a strategic national asset, and it is the duty of management to keep it healthy.

Management’s activities must not  lead to the loss of workers” jobs”, meanwhile he made it clear that his visit was in support of the refinery’s issues , and that at the end of the day, all stakeholders, including government, management and staff must come together and commit to making TOR a better and viable institution.

“A collapse of the refinery would have clear, direct impact on the jobs and livelihoods of all staff at the refinery”, he stressed.

The Managing Director of TOR, Mr. A. T Boateng noted in his remarks at the event that in selecting TOR as the first sector agency to visit, the Minister had underscored his commitment to seeing the refinery flourish, and that he and management were prepared to play their part in ensuring that the refinery lived up to its expectations  and delivered its mandate for the growth and development of the energy sector in particular and Ghana in general.

The Tema Oil Refinery (TOR) Limited is the only refinery in Ghana. It is authorized by its regulators to process crude oil and market petroleum products.

The refinery is situated in Tema about 24 kilometers east of the capital, Accra.It was 100% owned by the ENI Group (Ente Nationalie Indrocarburi) of Italy. 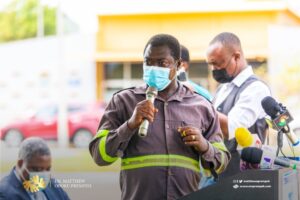 The Government of Ghana bought all the shares of GHAIP in April 1977 and became sole shareholder. In 1990 the name was changed to the Tema Oil Refinery (TOR).

Over the years the refinery has been plagued with debts, infrastructural challenges and difficulties in trying to pay its workers, which has resulted in several agitations by workers of the company.

It is expected that Dr. Prempeh will be able to bring all parties together to resolve the challenges and chart a new path for the refinery to sustain jobs and contribute to the economy.