The Coastal Development Authority (CODA) has officially handed over a completed 3-unit classroom block with ancillary facilities at Holy Innocent Anglican Basic School at Oduman in the Amasaman Constituency to the community and school authorities.

The project was financed by the Authority from the constituency’s allocation under the Infrastructure for Poverty Eradication Programme (IPEP).

The handing over took place at a brief but colourful ceremony with all the relevant key stakeholders participating. 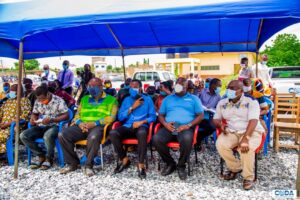 The project consists of 3 three classrooms fully fitted with electricity, ceiling fans and furnished with dual-desks.

The facility also has a staff common room and a storeroom.

Addressing the gathering, the CEO explained that the decision to undertake the project was reached through consensus after considering the priorities of the Amasaman Constituency.

According to him, CODA is funding other ongoing projects in the constituency under IPEP.

Lawyer Jerry Ahmed Shaib implored community leaders and school authorities to properly maintain the facility for the benefit of the community.

He applauded the contractors, FNJ Investments, for a clean and timely job done although they prefinanced the project.

The Headmistress called the intervention timely, especially in the era COVID-19 and the need for observance of social distancing by teachers and students. She also pledged the commitment of school authorities and PTA to take good care of the new classroom block.

The programme focuses on accelerating economic and social development through the provision of basic infrastructure. Projects are determined through an inclusive stakeholder engagement and a participatory needs assessment process involving all key relevant stakeholders. 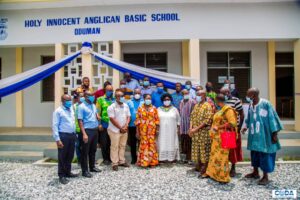