PIAC is the organisation tasked with monitoring and evaluating compliance with the Petroleum Revenue and Management Act (PRMA) by government and other relevant institutions in the management and use of petroleum revenues and investments.

Speaking at the 10th anniversary celebration of PIAC, at a ceremony held at the Kempinski Hotel, in Accra, President Akufo-Addo stated “that relations between PIAC and Government, which were in the past, at times, somewhat stormy, have, at least since I took office in 2017, been largely cordial and fruitful, and this has resulted in the prudent use of our nation’s petroleum revenues for the welfare and benefit of the Ghanaian people.”

According to the President, Government, since 2017, has ensured that, unlike in the past, the budgetary allocations of PIAC have been released to enable it undertake its activities.

Indeed, the President revealed that PIAC utilised a part of its 2018 budgetary allocation to procure its current office building at East Legon, in Accra, which brought an end to the era of evictions and threats of eviction by landlords.

“For as long as I remain President, support to PIAC will be forthcoming and on time,” he assured.

President Akufo-Addo urged PIAC, “now more than ever”, to continue to engage Government and relevant stakeholders, and help work towards the economic transformation of Ghana through the efficient use of the country’s hydrocarbon resources.

“Government is committed to its continued solidarity with PIAC, and assures it of Government’s considerable interest in all of its activities. I am hopeful that the co-operation between Government and PIAC will be deepened even further in the coming years for the goal of a united, progressive and prosperous Ghana,” the President added.

Touching on the relations between PIAC and the Ministry of Finance, he noted that delays in transmission of information between the two entities, emanating from the distortions in the deadline schedules of the reporting obligations of the two institutions, have led to the stoking of controversy. 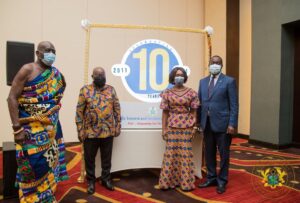 Towards the resolution of this, the President advocated for an amendment of the relevant provisions in the Petroleum Revenue Management Act.

“I will, in conclusion, urge the Ministry of Finance and PIAC to rekindle the holding of their quarterly meetings to ensure that issues of mutual interest and concern are addressed through dialogue.

“I also appeal to PIAC, in its publications, to help provide the general public with a better understanding of how petroleum resources are managed, and clarify swiftly its position on matters should it be misconstrued in the media space,” he added.