Speaking at the ceremony, the U.S Ambassador to Ghana Ms. Stephanie Sullivam congratulated the officers for the completion of a successful exercise.

According to her, “Your efforts will have a lasting positive effect in improving regional cooperation and information sharing among participating nations.”

The exercise focused on the collective capabilities for countering the trafficking of illegal arms and drugs, human trafficking, illegal migration, piracy, and illegal fishing.

There was partner nation collaboration efforts in support of the Yaoundé Code of Conduct, adherence to the rule of law, and in strengthening safety and security in the Gulf of Guinea and coastal areas in the West.

“Amid the challenges imposed by the global coronavirus pandemic, states along the Gulf of Guinea, together with their international partners, are still poised and willing to come together to fight the menace of maritime crime and incidents,” said guest of honor, Adm. Seth Amoama, Chief of the Defense Staff, Ghana Armed Forces. acknowledged.

He further stressed that, this stems from the fact that in recent times, there has been an increase in the number of vessels operating within the Gulf of Guinea region, bringing with it a commensurate increase in maritime incidents.”

Last year’s exercise was canceled due to the COVID-19 pandemic but this year, to accommodate the unique challenges of the pandemic, some events were held virtually.

The first-ever OE21 Virtual Pandemic Preparation and Response Engagement offered an opportunity for top medical experts from African nations, the United States and the United Kingdom, to share lessons learned during the COVID-19 pandemic. 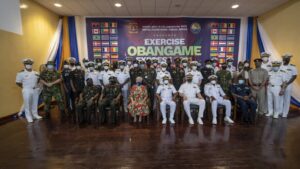 “I wish to end by once again expressing my gratitude to the United States Africa Command for their continuous assistance and varied contributions to improving maritime security in the Gulf of Guinea,” Amoama said.

“My sincere appreciation also goes to the governments of all the participating countries for committing time and resources to make this exercise a great success.” he added. 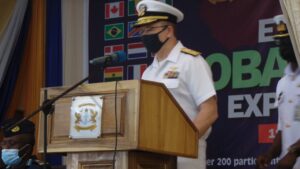 “For those of us in the sub-region, our concern is not only about preventing the threats in the Gulf of Guinea but also, empowering law enforcement agencies by equipping them with the requisite capacity and capabilities to effectively deal with the threats”, the CDS said.

On his part, the Chief of the Naval Staff (CNS) of the Ghana Navy – Rear Admiral (R/Adm) Issah Adam Yakubu in his overview address of the training period, stated that there was a pre-exercise maritime domain awareness training, to ensure various doctrines and standard operating procedures were synchronized, for the smooth conduct of the exercise.

The CNS added that because the nature of the scenarios involved regulatory and law enforcement agencies, the Environmental Protection Agency (EPA), National Investigations Bureau (NIB), Fisheries Commission, Customs Division of the Ghana Revenue Authority (GRA) and the Maritime Police, worked with their naval and air force counterparts, for a holistic and harmonized conduct of various tasks.

V/Adm Yakubu said that in spite of a few challenges encountered, such as limitations in surveillance capability, owing to logistical constraints, and non-participation of expected particular vessels and aircrafts, there has been improvement in communication amongst participating navies, air forces and other agencies, as a result of lessons learnt from previous exercises.

“Let me close by simply saying how proud I am, and how proud the U.S. Navy is, to call itself a partner to the navies and coast guards of Atlantic Africa and to our broader Atlantic partners in Europe and the Americas,” said Rear Adm.

Jeffrey S. Spivey, director, maritime partnership program, U.S. Naval Forces Europe and Africa. “May we continue to further the region’s capacity to secure and protect its maritime domain through cooperation and togetherness.”

DKT Educate Chemical Sellers How To Report On ADR