The Commander-In-Chief (C-In-C) of the Ghana Armed Forces (GAF) and President of the Republic of Ghana – His Excellency (HE) Nana Addo Dankwa Akufo-Addo, has presented forty (40) more COBRA II Armoured Personnel Carriers (APCs) to GAF, to help perform their constitutional mandate of preserving the territorial integrity of the country.

The presentation took place at the Abugah Square of the 153 Armoured Regiment, Gondar Barracks, Burma Camp, on Wednesday, March 31st, 2021.

HE President Akufo-Addo, further intimated that the COBRA II APCs, according to military standards, are very strong and versatile armoured vehicles, and would help contain even better, the security threats posed at the country’s Northern borders, as well as provide the necessary protection for her Western and Eastern Frontiers.

Manufactured in Turkey, the second-generation state-of-the-art Cobra armoured tactical vehicles, which is in deployment in more than 15 countries worldwide, would be operated for a wide range of missions, including counterterrorism and counter-insurgency operations.

At a short ceremony at the Gondar Barracks at Burma Camp in Accra, President Akufo-Addo said the presentation was in fulfilment of the promise he made in his first term in office to resource and modernize the armed forces to carry out their mandate effectively.

The Government has from 2017 been addressing the logistical and welfare needs of the GAF, providing some 33 Otokar Cobra armoured personnel carriers, 41 assorted Toyota multi-purpose vehicles, water tankers, a recovery truck, a refrigeration van, and number of utility vehicles. 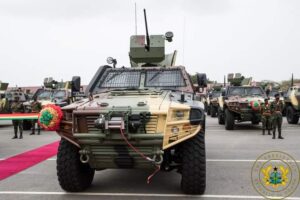 He said the robust and versatile Cobra II vehicles would help contain the security threats in the country’s northern border, as well as provide the necessary protection for the Western and Easter frontiers.

It has also upgraded old and constructed new housing units for troops.

Commending the Officers, Men and Women of the Armed Forces, for the work they do on a daily basis, to protect the territorial integrity and stability of Ghana, the C-In-C further urged them to use ongoing measures, such as Operations Conquered Fist and Motherland to create a secure, peaceful atmosphere at the North-Western, Northern and North-Eastern borders of the country and also to contain so-called secessionist activities along the Eastern Frontiers. 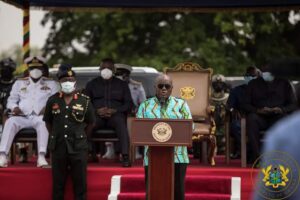 The President urged GAF to continue to collaborate with the National Security, Foreign Affairs Ministry and the Ghana Revenue Authority, as well as all relevant Ministries and agencies, to ensure that a robust disposition is maintained, that will deter potential aggressors, who may attempt to derail the political and socio-economic gains, chalked so far.

Honourable Dominic Nitiwul who doubles as the Minister for Defence and Member of Parliament (MP) for Bimbilla, in emphasizing the Administration’s determination to resource the Armed Forces, said the Armed Forces has been resourced with Seventy-Three (73) APCs, besides many other vehicles, within the last three years and these were procured in three batches. 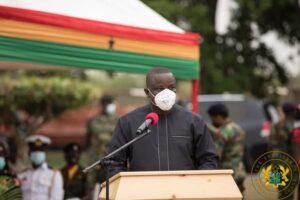 “The Ghana Armed Forces continues to benefit through various interventions, to re-equip and re-tool the force, to carry out its mandate, amidst threats of aggression within the country and the sub-region as a whole.

The COBRA-II, a vehicle specially designed to give protection to ground troops against mines and small arms fire, is a 4×4 Drive General Purpose Tactical Wheeled Armoured vehicle, which are manufactured in Turkey by OTOKAR, to meet the needs of modern Armies, with a winch also fitted to enable the vehicle to self-recover itself and others when stuck. 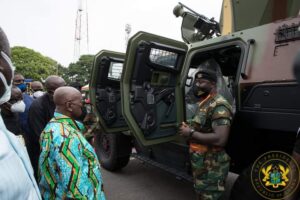