Amongst the schools which benefited from the benevolence of VMF included Ayikuma R/C Basic School(ARCBS) and the Ayikuma Methodist Basic School(AMBS).

The rest were Ayikuma Islamic Basic School (AIBS) and Mawuvio Outreach program (MOP), all of which are within the Ayikuma locality.

Over two hundred and fifty (250) students benefited from the kind gesture of the humanitarian organization with the focus being more on the female students than their male counterparts.

The health education, which centred on the Adolescent Reproductive Health (ARH) of the students with particular interest on the matter of girls’ general health during menstruation, saw a nurse from the 37 Military Hospital, Miss Sefarkor Attor touching on the signs which usually indicate the onset of menstruation amongst girls.

She indicated that pains that preceed menstruation in some cases could be normal or abnormal but must be investigated.

She noted that some girls experience severe pains in the lower abdomen amongst others to indicate the onset of their menstruation.

She debunked the assertion that having sex with a virgin could end menstrual pains while admonishing the students not to use any material apart from sanitary pad during menstruation adding because such materials could casue them harm.

In some cases she said, a clean sterile cloth which is able to soak up the blood during heavy flow during menstruation could be used to safeguard their general health.

According to her, the use of papers or toilet papers is injurious to their health since they contain chemicals which have a high risk of causing injuries to their vagina, fallopian tube and other organs associated with the female reproductive system.

She urged the students to ensure that they use sanitary pads instead of using anything that could cause serious damages to their general health now or in the future.

The health education which came off last Saturday, 5 June,2021 also saw the distribution of sanitary pads *and panty liners* to each female student to cater for at least three months of their monthly flow.

This, according to the founder of Van Moorhouse Foundation, Mrs. Vanessa O. Moorhouse is to ensure that the next three months of their life are taken care of in terms of the purchase of sanitary pads and pantry liners. 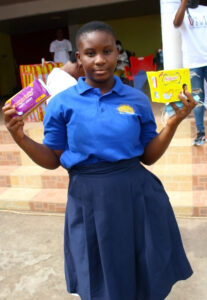 “We have decided to keep eyes on these students because of the hustle some of them go through to get just a sanitary pad”,she added.

Before embarking on this project, she indicated that her outfit conducted a research in that part of Greater Accra Region which showed that, out of every four girls, one gets pregnant and is unable to complete her basic education.

Which she thinks was alarming hence the health education.

According to the Director for Programmes and Administration at Van Moorhouse Foundation, Dr. Osbon Osei expressed his appreciation at the responses from the students to wit, the message had gone well.

“With the education given to the students especially with regards to how to wear sanitary napkins, we are sure they will become faithful personal hygiene ambassadors”,he opined. 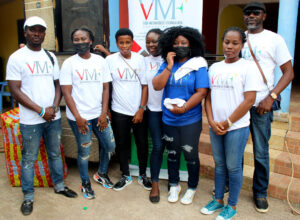 “We chose the lower schools because the message must start from that level so they can grow up with it and spread among their peers” he further said.

Before this sensitisation exercise, he disclosed that a research they conducted confirmed the students have virtually no knowledge about their menstrual health and that formed the basis of the choice of that part of the region.

On his part, a health worker with the Ga West Municipal Hospital, Japhet Keteku stressed the need to observe the covid-19 protocols in order not to be at the mercy of the coronavirus infection.

The Van Moorhouse Foundation pleaded for support and sponsorship from all stakeholders to help them continue to enhance the lives of the less privileged in our societies.