The central Motor Transport and Traffic Department (MTTD), of the Ghana Police Service has embarked on a Speed Enforcement exercise to check over speeding at accident-prone areas in Accra.

Wednesday morning’s operation lead to the arrest of 26 offenders in the capital city.

Deputy Superintendent of Police (DSP)Efia Tenge, Head of Public Affairs Unit of Accra Regional Police Command explained that, the special exercise which was carried out at Tesano is part of an ongoing exercise by the Department, in partnership with the Accra Metropolitan Assembly (AMA) and Bloomberg Philanthropies to reduce the carnage on the country’s roads.

DSP Tenge said, it is observed that some motorists do not drive within the 50kph speed limit stipulated by the law in the city, a situation that calls for stringent measures to enforce it.

Similar operations have been carried out at various locations such as Korle-Bu, Anyaa, Kojo Thompson Road, Kawukudi among others and offenders arraigned before motor courts where fined between ¢350 to ¢2,400 on average,She noted. 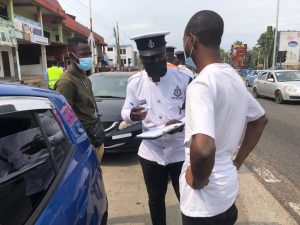 DSP Tenge said those arrested at Tesano for flouting the speed limits are processed to appear before the Abeka Motor Court on Thursday July 29,2021.