This follows a visit to the Primary school by the foundation in June 2021 where it was observed that pupils were writing and sitting on floors during lesson times. At the visit, it was reported that the pupils were sitting on the floor due to having limited amount of normal desks available for learning.

The Van Moorhouse Foundation (VMF) is a non-profit UK based organization with branches in Ghana and the US. The foundation was established to enhance, improve, and promote a better life for vulnerable individuals and families within impoverish communities. 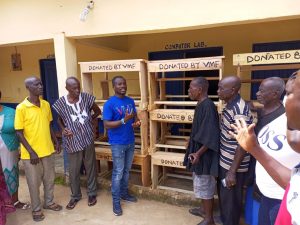 In Attendance at the donation were the Director of Programs and Administration of the foundation, Dr Osbon Sarfo, volunteers of the foundation, the assembly man of Asikam Village (Hon.Gideon Ofori Boateng), the chief of the community (Osaberimah Asante Owusu Adiome), Kontihene (Baafo Koranteng, the PTA Chairman (Mr Kingsley Appiah Labi), the Headmistress, Madam Gifty Korkor Tawiah and staff of the school.

Making the presentation of the desks on behalf of Van Moorhouse Foundation to the school, the Director of Programs and Administration of the foundation, Dr Osbon Sarfo called on the pupils to ensure that they are always in school.

Stressing, “No longer will they have to carry stools and chairs from their house to school, or sit on the floors, because they now have enough desks to sit on and learn in the classroom”.

He was optimistic that this noble gesture will help improve learning. Adding that “I believe strongly that if a solid foundation is laid down for children, they can grow up to become meaningful and prominent people in the society”.

On her part, the Headmistress, Madam Gifty Korkor Tawiah thanked the foundation for the donation and added that she “hopes this will not be a one-day wonder but that there will be other assistances from other charities in the future”.

In an interview with the independent online, Ms Helena Tetteh, the primary one teacher said before the donation, teaching was very difficult. For a class of 54 pupils there were only two chairs.

“The children were always fighting among themselves as to who should sit on the chairs. Should any child get up to use the bathroom then the ones standing quickly occupied the chair, otherwise they had to stand until school closed or they were sitting on the floors and writing”.

She was very grateful to VMF for the timely gesture stating that “You have done well, God bless you”.

In a similar interview with the Assistant Headmaster, who is also the computer studies teacher, Mr Michael Asiedu said the desks had really helped the school because it was heart-breaking to see the pupils sitting on the floor.

He said he was grateful to VMF because so many people had come to make promises but had not delivered.

He however used the opportunity to thank VMF for their previous donations of providing reading and writing materials to the school. 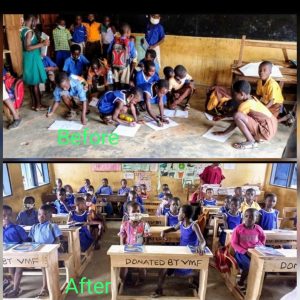 He further added that, It is one thing that is very important to the school because the learning process has become computer-based and it’s becoming more prevalent in the classroom.

He appealed for support adding that “if children are able to get the practicality of what they are taught it really helps them”.

Some other projects that were carried out by the Van Moorhouse Foundation at the school was donating paints, doors and ceiling fans in support of the teacher’s sleeping quarters at Asikam.