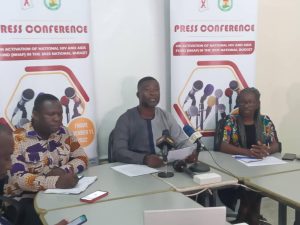 The leadership of Ghana HIV and AIDS Network (GHANET), Network of Persons Living with HIV (NAP+) and Civil Society Organizations (CSOs) in Health, has appealed to the Minister for Finance, Hon. Ken Ofori-Atta to as a matter of urgency, include the activation of the National HIV and AIDS Fund in the 2023 Appropriation Bill that would be sent to Parliament in the next few days to save lives.

“According to Act 938 (section 22), the Minister is the ONLY Government functionary clothed with the mandate to ACTIVATE the National HIV and AIDS Fund.

At this present time, we wish to acknowledge the challenges of fiscal space the Government is faced with, with respect to the national budget for 2023.

Addressing the media, the President of Ghana HIV and AIDS Network (GHANET), Mr. Ernest Amoabeng Ortsin on behalf of the other groups disclosed that, the lives of members are in grave danger if authorities do not act fast.

He pointed out that, the Global Fund which have been the single largest donor the National HIV and AIDS response since 2002, is now sending strong signals they may be cutting back on their support to Ghana, especially with regards to the supply of free ART medications and other essential commodities required in the fight against HIV and AIDS.

The groups however, appealed to President Akufo Addo who happens to be the Chairman of the Governing Board of GAC to fulfill the pledged made to commit US$100 million, over a five-year period, into the National HIV and AIDS Fund.

They further appealed to the First Lady, Mrs. Rebecca Akufo Addo whom according to them, is the face of the “Free to Shine” campaign in Ghana under the auspices of the Organization of Africa First Ladies for Development (OAFLAD).

“We wish to remind Her Excellency that, there is no way we can eliminate morher-to-child transmission of HIV and AIDS by 2030 if we do not make resources available for the national response. We therefore appeal to her, as the Mother of the Nation, to add her voice to the call for the activation of the National HIV and AIDS Fund”

Mr. Amoabeng also appealed to the Development Partners particularly, Global Fund, UNAIDS, WHO, PEPFAR/USAID and others to use their influence in the country to support their call on the Government to activate the National HIV and AIDS Fund.

“We call on Traditional Rulers, Religious Leaders, Workers Unions, Students, Traders and people from all walks of life to support their campaign. HIV is no respected of persons and we are all at risk.”

“Let us therefore refrain from being judgemental about the disease and get the understanding that, today, there are thousands of adolescents who are living HIV because they were born with the virus, Many of them are in primary secondary and tertiary institutions across the country. For the sake of the future of these young people, we must all hold our hands together and call on the Government to activate the National HIV and AIDS Fund in the 2023 Appropriation Bill”.