A suspected landguard has shot a Town and Country Planning official, Prince Tetteh in the foot without any provocation, damaging his foot.

The culprit, identified as Tommy (aka Scorpion) was said to have confronted the Town and Country official in the early hours of that day in the company of the land owner, who had gone to seek building permit as the law requires.

Upon reaching the land for inspection, the said ‘Scorpion’ demanded that, the official and the land owner move away from the land; and without any provocation, went for a pump action gun from his motorcycle and shot the official in the foot. 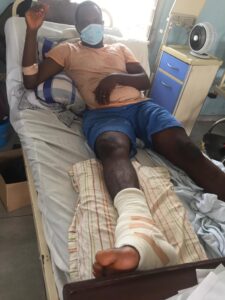 According to the eye-witness, who is also the land owner who went for the services of the official, the incident happened about three weeks ago, and that the matter was reported to the Police immediately the incident occurred.

According to him, the suspect was granted bail at the initial stages after reporting the matter to the Police, but upon interventions from higher authorities, he was re-arrested and arraigned before Court on March 6th, 2021.

He was remanded in Police custody for a month to re-appear on April 26th, 2021.

In a related development, the Divisional Youth Leader of Kokrobite Traditional area, Augustine Nii Quaye has condemned the act, calling on authorities to ensure that the culprit is brought to book and justice duly served.

He called for protection of officials who deal in land matters, since it has become very dangerous to them.
Experts have also called on government and security agencies to shift attention and focus to the menace of landguard again, and find lasting solution to it as a nation. 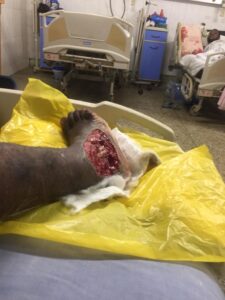