The National launch of the European Union (EU) Landscapes and Environmental Agility across the Nation (LEAN) project took place at the Alisa Hotel in Accra.

The project seeks to directly contribute to the national efforts of conserving biodiversity, improving livelihoods of smallholder farmers, increasing climate change resilience, and reducing emissions from land-use changes in the Savannah, High Forest, and Transition Zones of Ghana.

The implementation of the LEAN project in Ghana will run until 2024 by a consortium of World Vision, Tropenbos Ghana, EcoCare Ghana, and Rainforest Alliance and with funding of a sum of $4 million from the European Union (EU) for the period of the project.

Roberto Schiliro, EU team leader for infrastructure and sustainable development who represented the funding partners of the project at the launch indicated that “In this It is crucial to support actions that promote food and nutritional security, agricultural livelihoods and agro forest-industry in Ghana,”

In this regard, the project is designed to complement other ongoing initiatives like the EU funded governing Multifunctioning Landscape Project in the Kwaebibirem-Atiwa area of the Eastern Region and implemented by the Centre for International Forestry Research (CIFOR).

Furthermore, the project will also strengthen the existing partnerships between the Ministry of Food and Agriculture, the Ministry of Lands and Natural Resources, and the European Union to support Agriculture and Forestry, he acknowledged and added that, it is important to ensure continuous food security in the country.

Interacting with the media on the sidelines of the launch, Director of Tropenbos Ghana, Mrs. Mercy Owusu-Ansah explained that, unlike other past projects, LEAN is centered to focus on numerous agro commodities and not on one agro commodity as other projects are currently focusing on.

To her, the continuous depletion of the forest reserve  is worrying and admitted that, it is essential and crucial to team up with likeminded organisations and key stakeholders to institute such project to actualize the needed result and impact in these forest and zones. 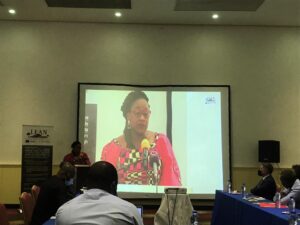 On this note, she pointed out that, her outfit and that of the other implementing partners would not sit back for government agencies to tackle these depletion of our forest reserve.

“We are moving to an era where members of communities will be engaged and dragged along every step of the way to solve the urgent issues”, she emphasized.

This she believes that, at the end of the day, her organisation, the three partnering organisations, funding partner, EU and other stakeholders would see and appreciate that the country’s forest cover has increased and the livelihoods of farmers in the targeted communities have improved.

Taking his turn to address the press and dignitaries at the National launch of LEAN project, the Director of Crop Services at the Ministry of Food and Agriculture (MoFA)  Mr. Seth Osei-Akoto assured stakeholders of the Ministry commitment and as well will play a key role to ensure the smooth implementation of the EU-funded LEAN project, hence successful.

“I wish to assure you of the support of the Ministry of Food and Agriculture to collaborate with partners of the EU-LEAN project to achieve the objectives outlined for a sustainable environment and food production,” he said.

He further noted that by so doing, Ghana as a signatory to the Paris Climate Agreement will be working towards achieving its Nationally Determined Contribution (NDCs) to the agreement.

He also used the occasion to commend the implementing partners forming the consortium for the project, indicating that the multi-sectoral approach of the LEAN project to involve the financial sector, forestry sector, private sector, CSOs, NGOs, traditional leaders, and other stakeholders, gives a positive outlook for the success of the project.

Adding her voice to the praises and applauses, Director of Climate Change, Madam Roselyn Fosuah Adjei who read a speech on behalf of the Forestry Commission expressed the Commission appreciation to the European Union (EU) for funding the LEAN project.

“The commission appreciates the European Union for funding this catalytic project which will expedite needed landscape action to speed up and achieve the national policy direction for the forestry sector, which represents a prominent feature in Ghana’s Nationally Determined Contributions (NDCs) to the Paris Agreement,” she acknowledged.

The Commission she said will do all it can to push the project to succeed and used the opportunity to thank the Consortium partners for their innovation, creativity, and commitment in the national fight against deforestation and forest degradation.

Representing the Ministry of Lands and Natural Resources, the Technical Director in Charge of Forestry, Mr. Musah Abu-Juam said that it is heart warming to note that, the LEAN project is in line with the objective and strategies underpinning the Ghana forest and wildlife policy 2012.

For a country like Ghana, where about 70% of local community members particularly women depend on forests for their food and energy requirements, he explained that, due to this, his Ministry has the sustainable management of the country’s natural resources at the heart.

As a result, “the Ministry of Lands and Natural Resources takes interest in the landscape level planning approach through the collaborative efforts between resource users and managers”, Mr. Musah Abu-Jaum acclaimed.

His outfit particularly he noted takes an exceptional interest in the EU-funded LEAN project and looks forward to a fruitful collaboration and implementation of the project with the World Vision, Tropenbos, EcoCare Ghana, and Rainforest Alliance.

For the realization of the objectives of the LEAN project, the Rainforest Alliance, Tropenbos, Ghana, EcoCare Ghana, and World Vision Ghana will be working closely with the EU Delegation, private sector, local communities and core national partners, to catalyse systemic changes across three biodiversity significant and economically important landscapes to help translate the sustainability commitments into the workable solutions on the ground.

Below are the benefits the landscapes is expected to have for the period of the project:

The Western Zone B High Intervention Area landscape and the adjoining Sui River landscape has been designated as one of the Hotspot Intervention Areas (HIAs) under the Ghana Cocoa Forest REDD+ Programme (GCFRP) and is the most advanced landscape with respect to the stakeholders’ interest and commitment to collaborate and has already secured support for the set-up of the multi-stakeholder Landscape Management Board (facilitated by Rainforest Alliance).

This landscape falls under the Forest Savannah Transition landscape REDD+ programme, which doesn’t yet have an HIA demarcation and is mostly rural and generally young, with an increasing percentage of youth and women engaged in agricultural production.

Most households (99.3%) are engaged in crop farming, with the majority engaged in the production of food crops, palm tree and cash crops like cocoa. With such a high percentage of the region’s households engaged in farming, only a landscape-scale transformation will achieve a broad and sustainable impact for the region.

Located in the Northern regions, this landscape falls under the Subnational level Emission Reductions Programme for the Shea Landscape of the Northern Savannah Woodland (the Shea Savannah Woodland Programme. Serious drainage problems, high amounts of runoff and Erosion are some of the significant agricultural constraints in the landscape with noted Human activities including shifting cultivation, slash and burn method of land preparation and illegal chain-saw operations affecting sustainability.

Meanwhile, climate resilience is the ability to anticipate, prepare for, and respond to hazardous events, trends, or disturbances related to climate. Improving climate resilience involves assessing how climate change will create new, or alter current, climate-related risks, and taking steps to better cope with these risks.

As greenhouse gas emissions continue to rise, climate change will continue to accelerate.

Even if emissions were to stop today, the climate would continue to change for some time as the Earth’s system responds to the warming already underway.

It makes sense to anticipate changes and act now to minimize future economic and social risks.